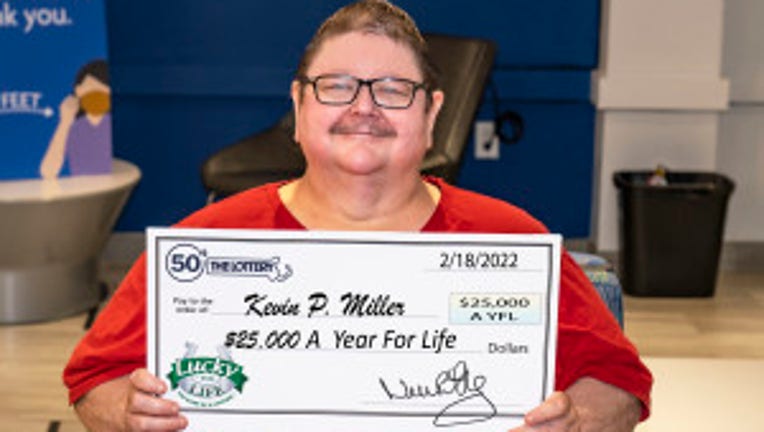 MONTAGUE, Mass. - A Massachusetts man knows exactly where to go to win the lottery after scoring his second win from the same location.

Kevin Miller of Montague, Massachusetts, recently won the $25,000-a-year for life prize after matching the first five numbers on his Quick Pic ticket for the multi-state Lucky for Life game.

The drawing took place in February, but lottery officials said Miller claimed his prize in July.

Miller purchased the winning ticket at the Food City, 250 Avenue A in Turners Falls.

In 2016, he bought a winning ticket from that same location and took home the $1 million prize in the Massachusetts State Lottery’s "Cadillac Riches" instant ticket game.

For his latest win, lottery officials said Miller chose the cash option and received a one-time payment of $390,000 (before taxes).

Mega Millions jackpot: What to do if you win

The Mega Millions lottery jackpot now sits at an astounding $1.1 billion ahead of Friday night’s drawing — which would be the second-highest number in the lottery's history.

As Miller collected his win, another person became a billionaire in the highly-publicized Mega Millions drawing, which had a $1.337 billion jackpot.

According to megamillions.com, there was one jackpot-winning ticket in the draw Friday night, and it was bought at a Speedway gas station and convenience store in Des Plaines.

"We are thrilled to have witnessed one of the biggest jackpot wins in Mega Millions history," Ohio Lottery Director Pat McDonald, the current Lead Director for the Mega Millions Consortium, said in a statement on the lottery’s website. "We’re eager to find out who won and look forward to congratulating the winner soon!"

The jackpot was the nation’s third-largest lottery prize. It grew so large because no one had matched the game’s six selected numbers since April 15. That’s 29 consecutive draws without a jackpot winner.

Lottery officials had estimated the winning take at $1.28 billion, but revised the number up to $1.337 billion on Saturday.