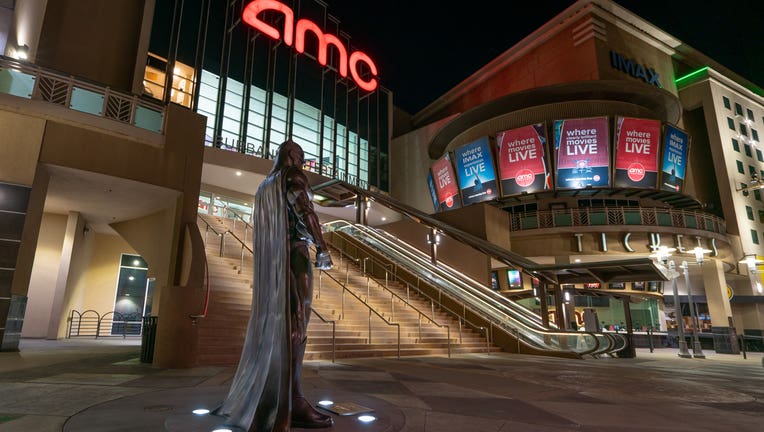 General views of the Batman bronze statue on the AMC Walkway in Downtown Burbank, home of Warner Bros studios on November 27, 2020 in Burbank, California. (Photo by AaronP/Bauer-Griffin/GC Images)

AMC Entertainment Holdings Inc is going to sell up to 50 million additional shares to try to survive the coronavirus pandemic.

The movie theater giant made this news public with a Wednesday filing to the U.S. Securities and Exchange Commission. This announcement follows the theater chain’s previous SEC filing that said it would be selling 200 million shares.

AMC’S proposed maximum offering price is $2.50 per share, according to its latest filing. If the company is successful in making these sales at its proposed price, AMC would generate $125 million.

"Except as otherwise provided in the applicable prospectus supplement, we intend to use the net proceeds from the sale of the Class A common stock offered by this prospectus for general corporate purposes, which may include the repayment, refinancing, redemption or repurchase of existing indebtedness or capital stock, working capital, capital expenditures and other investments," AMC’s SEC filing said under its use of proceeds section.

The movie theater industry has struggled as dozens of key markets have either shuttered operations under government orders or are operating under restrictions, including limited hours or imposing capacity limits.

Months into the pandemic, AMC warned that it could run out of cash by early 2021.

"In the absence of additional liquidity, the company anticipates that existing cash resources will be depleted during January 2021," the theater giant wrote in an SEC filing submitted on Dec. 11.

Failure to secure funding through stock sales could mean bankruptcy and restructuring, according to AMC.

"Our ability to obtain additional liquidity, which if not realized or insufficient to generate the material amounts of additional liquidity that will be required until we are able to achieve more normalized levels of operating revenues, likely would result with us seeking an in-court or out-of-court restructuring of our liabilities, and in the event of such future liquidation or bankruptcy proceeding, holders of our common stock and other securities would likely suffer a total loss of their investment," the theater company wrote.